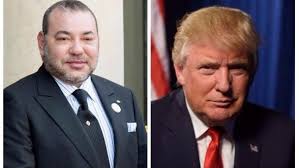 In an unprecedented move, US President Donald Trump has recognized Morocco’s sovereignty over the Sahara and announced to King Mohammed VI the opening of a US consulate in Dakhla.

The US president tweeted this Thursday that he has signed a proclamation recognizing Moroccan sovereignty over the Sahara, adding that the US has no option other than supporting Morocco in its cause.

Trump shared a series of tweets lauding diplomatic relations between the two countries.

“Morocco recognized the United States in 1777. It is thus fitting we recognize their sovereignty over the Western Sahara.”

The US president also reiterated the US’ support for Morocco’s Autonomy Plan.

“Morocco’s serious, credible, and realistic autonomy proposal is the ONLY basis for a just and lasting solution for enduring peace and prosperity!” he tweeted.

Later Thursday, President Trump informed King Mohammed VI during a phone talk of “the promulgation of a presidential decree, with what this act entails as undeniable legal and political force and with immediate effect, relating to the decision of the United States America to recognize, for the first time in its history, the full sovereignty of the Kingdom of Morocco over the entire region of the Moroccan Sahara,” the Royal office said in a statement.

“In this context, and as the first concretization of its sovereign initiative of great importance, the United States of America decided to open a consulate in Dakhla, with an essentially economic vocation, in order to encourage American investments and contribute to economic and social development, in particular for the benefit of the inhabitants of the southern provinces,” the Royal Office statement added.

On this occasion, the Sovereign who described the move as historic expressed, in his Name and on behalf of the entire Moroccan people, deep gratitude to the American President.

The King also conveyed his sincere thanks to the American President and his team for this frank and unambiguous support to the Moroccanness of the Sahara; support that strengthens the powerful strategic partnership between the two countries and elevates it to the level of a true alliance that encompasses all fields.

This constructive position of the United States reinforces the dynamics of the consecration of the Moroccan identity of the Moroccan Sahara, confirmed by the positions of support by a group of friendly countries, as well as by the decisions of many countries to open consulates in the Moroccan southern provinces, the statement pointed out.

It also intervenes after the decisive and effective intervention of the Royal Armed Forces, in the area of Guerguarat, in order to maintain security and stability in this part of the Moroccan territory, and to ensure the free movement of people and goods with the African sister countries, it noted.

During the phone talks, King Mohammed VI and the US President also discussed the current situation in the Middle East region.

In this regard, the Monarch who recalled Morocco’s constant and balanced positions on the Palestinian question, stressed support for a solution based on two States living side by side in peace and security, and underlined the need for the respect of the freedom of worship for the followers of the three monotheistic religions, as well as the respect for the Muslim seal of Al-Quds Acharif and the Al-Aqsa Mosque, informed the US president of the moves Morocco intends to take in the context of the special ties that unite the Jewish community of Moroccan origin, including in Israel, to Morocco and its King.

In this context, the Monarch announced that Morocco will grant direct flight authorizations for the transport of members of the Moroccan Jewish community and Israeli tourists from and to Morocco.

Morocco will also resume official contacts with Israel about the establishment of diplomatic relations as soon as possible.

Contacts will also seek to promote innovative relations with Israel in the economic and technological fields including, and to reopen liaison offices in the two countries, as was the case previously up to 2002.
King Mohammed VI made it clear that these measures in no way affect Morocco’s permanent and sustained commitment in favor of the just Palestinian cause and its determination to continue to contribute effectively and constructively to a just and lasting peace in the Middle East.

During the phone talks, the King and the American President spoke of the ongoing efforts to resolve the crisis at the level of the Gulf Cooperation Council.

In this regard, and given the bonds of solid fraternity, sincere cordiality and mutual appreciation, uniting King Mohammed VI and his brothers Kings and Emirs of the Arab Gulf countries, the King expressed hope that the positive developments lead to the achievement of the desired reconciliation, as this will consolidate security and stability in the Gulf region, and achieve comprehensive Arab security and economic and social development for the benefit of the peoples of the region, the Royal Office statement said.