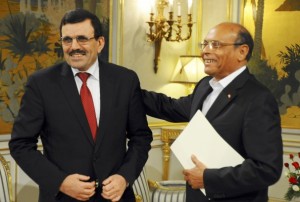 The Tunisian government has decided to go earlier than expected. The articles of the constitution are still being voted by the parliament. The resignation of Prime Minister Ali Larayedh could be due to the social unrest that has been gaining momentum in the country lately. The technocratic government to be led by Mehdi Jomaa is expected to take over as soon as possible rather than the 15-day plan which has been agreed upon.
Larayedh’s resignation marks the end of Tunisia’s democratically elected government in the post Mubarak era. Before announcing his resignation to the country, he reminded his compatriots in a televised speech that “we took on our responsibilities in very difficult conditions” but have nevertheless “worked for the benefit of our country and we respect our commitment”.
This week in Tunisia has witnessed the rise of violent protests mainly due to demands for better living conditions. The government before resigning suspended the new vehicle tax that it introduced this year in order “to not give any chance to terrorism and to criminal groups”. The tax was widely condemned and also contributed in igniting demonstrations across the country.
Prime Minister Larayedh will henceforth be “supervising the running of the country until the new government of Mehdi Jomaa is formed”. The Ennahda led coalition government has been under mounting pressure to relinquish the grip on power it won after the uprising in elections to a constituent assembly, as the economy has stagnated and social unrest has intensified.
The powerful UGTT added its voices to the demands of the population by calling for a general strike on Wednesday to protest at the persistent economic crisis. Tunisia is trying to acquire a half a billion loan from the International Monetary Fund to respond to demands.