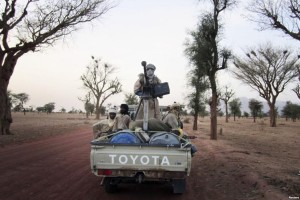 Mauritania and Mali have decided to join their forces in combatting against the presence of armed groups in the two countries. An agreement was signed in Nouakchott by the presidents of both countries to reinforce the military cooperation between them. The Sahara desert is one of the world’s largest desert and countries are faced with difficulties in monitoring the numerous illegal activities happening there. The presence of armed groups and terrorists has obliged the countries to double their efforts especially after the war in Mali.
In a released joint statement, President Ibrahim Boubacar Keita of Mali and Mauritanian President Mohamed Ould Abdel Aziz stressed that the signing of the accord showcases their determination to free the region from violence and terrorism. The accord according to the statement is a sign of their agreement “not to tolerate the presence of any armed or terrorist group that could potentially destabilize” the two neighboring countries.They also agreed to boost cooperation between their armed forces with “periodic meetings, the regular exchange of information and close consultations”.
In a bid to make their cooperation more effective, both presidents underlined the importance of a “greater cooperation between all Sahel-Saharan countries to coordinate operations in the fight against armed terrorists, drug traffickers and illicit smuggling”.
Al-Qaeda in the Islamic Maghreb (AQMI) has posed a great deal of insecurity in the Sahara desert especially in Mali where it led an armed struggle against the state. It occupied the northern part of the country for nine months in 2012, installing a brutal version of sharia law in cities under the control of extremist groups.Mauritania’s Aziz has actively fought AQIM’s presence in the region, and his troops launched raids on their bases in Mali in 2010 and 2011.