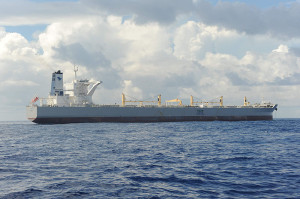 The self-acclaimed regional government of eastern Libya has invited oil firms to buy oil from ports under its control. Tripoli has reacted authoritatively to the open invitation warning that ships attempting to deal with the rebels will be sunk. The oil ports have been under the control of the rebels since last year. The government has lost billions in revenue due to the standstill.
Abdel-Rabbo al-Barassi, prime minister of the self-declared government in the Cyrenaica region, said the oil will be sold “according to the law” and urged “global oil companies” to deal with them.
Libya’s Defense Ministry spokesman, Said Abdel-Razig al-Shbahi,announced that “if a ship docks in one of the closed ports and it does not leave the port again, then we will destroy it”. Al-Barassi has defied such warnings stating that “the oil security guards will guarantee the safety of tankers”.
The government in Tripoli has always maintained that it will use the force necessary to stop ships dealing with the rebels. Oil Minister Abdelbari Arusi also added that companies “dealing with the armed groups which have closed the oil ports will be sued and banned from any future cooperation”. He claimed that the rebels lack the know-how to operate the machines and are “probably forcing our staff to operate the pumping tools”.
Libya produces almost 650,000 barrels a day of oil, of which 510,000 bpd was being exported. The rest is used to feed the Zawiya and Tobruk refineries. The government could be facing serious financial problems if the closure of ports continues.
The government is struggling to control the actions of the rebels in the country. Eastern Libya known as Cyrenaica is the most vibrant of the regions to seek for autonomy.