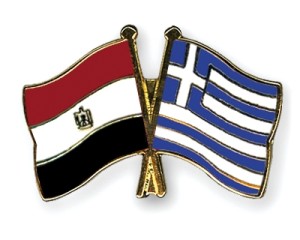 Interim President Adly Mansour was on a one day visit to Greece to strengthen bilateral relations and investments between the two countries. It’s his first visit to the European Union after being invited by the Greek president, Karolos Papoulias. He was accompanied by his Foreign Affairs Minister Nabil Fahmy and Tourism Minister Hisham Zazzou. The Egyptian delegation was welcomed by the Greek President upon arrival at the airport.
After a closed door meeting between the two presidents, President Mansour presented himself to the joint press conference as the representative of “the new Egypt, which a few days ago took its first step towards [becoming] a modern, civil state”. The North African country has a new constitution after more than 98% of the population approved it in a referendum. The Muslim Brotherhood and several other parties decided to boycott the referendum. The vote was applauded by European Union’s Foreign Policy Chief, Catherine Ashton, as she hopes that it will lead the way back to a democratic civilian government.
Dwelling on the relations between Athens and Cairo, President Mansour described Greece as the “most understanding countries of Egypt’s historic situation” due to their non-intervention in Egypt’s internal affairs. Both countries have highlighted their determination to increase mutual investments. Greek investments in Egypt are valued around a billion dollars per annum.
The two presidents also talked about regional issues concerning them; amongst which was the war in Syria. Mansour called on the international community to fight against “extremism and terrorism” and believes that a political solution could bring an end to the war. Both presidents called for an everlasting solution between Israel and Palestine. They also affirmed their support for nuclear proliferation in the Middle East and North Africa.