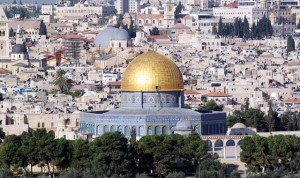 The Al-Quds Committee has regrouped Muslim countries in Morocco to renew international pressure on Israel and its policies in the occupied territories. The Chairman of the committee, King Mohammed VI of Morocco, urged for the unification of their efforts to defend the city of Jerusalem. Israel’s settlement plans in the occupied territories are a major setback for a peace deal with the Palestinians. Under international law, they are illegal.
King Mohammed VI called for “a strong mobilization of our own means and resources… to defend the Holy City” of Jerusalem. The Al-Quds mosque is the third holiest place in Islam after Mecca and Medina.
Negotiations between the Palestinian Authority and Israel have often been hampered by Jewish settlement plans and attacks emanating from the Palestinian territories. Lately, Israel has announced 1800 settlement plans in the occupied West Bank. Palestinian President Mahmoud Abbas told those present at the meeting that negotiations are used by Israel as “cover” for its settlement expansions.
At the end of the two-day meeting, the Al-Quds Committee released a statement calling for the international committee to “put pressure on Israel to stop the illegal and provocative settlement construction” and work towards creating “a favorable context for the pursuit of peace negotiations”.
Israel has not reacted to the statement. The international community has not been supportive of settlement plans because of the negative impact it can have on a peace agreement.                        Prime Minister Benjamin Netanyahu was not pleased with the reaction of the European Union regarding the announcement of the new settlement plans.  He accused some of its members of “hypocritical” attitude towards the peace process. He urged France, Britain, Spain and Italy to campaign against militancy in Palestine rather than Israel’s construction projects.