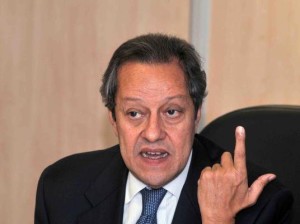 Minister Mounir Fakhry Abdel-Nour of the Ministry of Investment, Foreign Trade and Industry will be concentrating on attracting investment, promoting foreign trade and industry after his reluctance to accept the public sector under his ministry, a source revealed. The public sector is under Prime Minister Ibrahim Mehleb’s office and a restructuration program will soon be presented. The public sector has been a very sensible debate since the beginning of the revolution 3 years ago.
Egypt’s state owned companies have been faced with numerous challenges because most of them function on deficit. An administrative court also ordered several private companies to be renationalized based on workers’ demands and some cases are still being investigated. Investors are fleeing the country wherein some are engaged in legal battles at the International Court of Arbitration.
Central Bank Governor, Hisham Ramez, said nine public holding companies and their subsidiaries will be soon be part of a restructuration program under an independent sovereign fund. He didn’t say when the program will be implemented.
Egypt’s public sector has been paralyzed by the political instability and violence in the country. The situation is further worsened by frequent strikes organized workers, many of whom are unpleased with losing the advantages they once enjoyed when Gamal Abdel-Nasser was in power. Minister Mounir Fakhry Abdel-Nour’s refusal to take up the public sector portfolio could be linked to such reasons which have rendered the management of the sector very difficult.
It seems like Egypt is going back on its path of nationalization after launching privatization programs in 1991 and announcing a proposal to adopt a voucher privatization 2008. Although the 2008 voucher privatization was rejected, the new government could be working towards reactivating it.
Egypt’s first investment ministry was created in 2004.