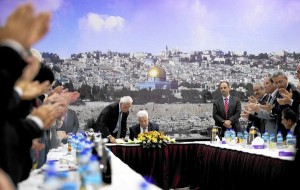 Palestinian authority is seeking to gain membership and recognition of 15 UN bodies and conventions paving the way for statehood.
The new Palestinian UN bid comes as response to Israeli refusal to release the final group of prisoners, which had originally been scheduled for the weekend. Palestinian officials say this shows that Israel has failed to honor it promise it made at the beginning of this round of talks.
In a TV address announcing Palestinian membership applications to UN bodies, president Mahmoud Abbas said :”we are not doing this against the US – this is our right. We never agreed to waive our right. We want to see a Palestinian state living side by side to Israel”.
Following the announcement, US secretary of state John Kerry, who is expected to visit the Maghreb this week, had cancelled plans to travel back to the Middle East.
Last year, Mr. Abbas had been persuaded by the US to put the UN membership bids on hold in favour of nine months of peace talks in exchange for which Israel would release 104 Palestinian prisoners.
The Palestinians move shows their exasperation with Israeli procrastination manoeuvres and the failure of the US administration to bridge the deep gap existing between Israelis and Palestinians.
A Palestinian official insists that joining UN organisations does not necessarily mean the end of the peace talks. “Bid for UN membership is our right as a sovereign nation. The UN has nothing to do with the negotiations”, he said.
In 2012, the UN General Assembly has voted in favour of upgrading the Palestinians status to that of a “non-member observer state”. It places the Palestinians in the same category as the Vatican. Palestinians were previously listed as a UN observer “entity” with no voting rights.
The new status is an indirect recognition of the Palestinians’ claims on statehood in the West Bank, East Jerusalem and Gaza Strip. It grants them some privileges such as the rights to participate in general debate and to co-sponsor resolutions. The new status also allows them to join a number of UN agencies, as well as the International Criminal Court (ICC).