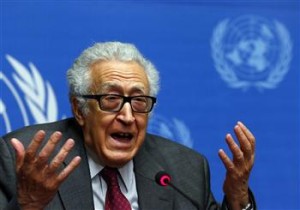 The secretary General of the United Nations has announced that Lakhdar Brahimi will be stepping down from his post at the end of the month. Brahimi is the UN and Arab League envoy to war torn Syria. Brahimi gave up Tuesday after trying unsuccessfully to mediate an end to Syria’s civil war, has spent his career in the diplomatic trenches of the world’s most intractable conflicts.
Brahimi will be the second person to give up on the Syrian mission after Kofi Annan. Both of them have blamed the lacked of cooperation of the warring parties or those that are supporting them. The Algerian renowned diplomat has been able to bring the rebels and the government to the negotiation table twice in Geneva but little has been achieved in stopping the war.
Questioned on the evaluation of his efforts, Brahimi replied that he is “not disappointed” because he didn’t expect to achieve results “this first time.” The Syrian conflict is being backed by different countries and the announcement of presidential elections by Damascus is considered to be the final blow to Brahimi’s efforts to bring peace to Syria.
Russia and the United States support the government and the rebels respectively. They are heavily divided over the issue with Russia vetoing resolutions targeting the Assad government. Brahimi has warned that there is no “magic wand” to end the war before concluding that it will take two decades to end it if negotiations continue at the same rate.
As a veteran of Algeria’s war of independence against colonial ruler France over five decades ago, and later as foreign minister, Brahimi carries weight in the Middle East, and was the envoy of both the United Nations and the Arab League. He is known for his patience.