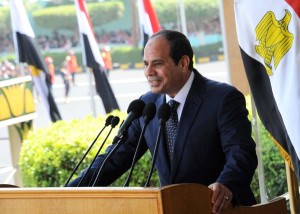 Algeria will be hosting President Abdel Fattah al-Sisi for two days ahead of African Union’s 23rd Ordinary Summit to which Egypt is invited. President Sisi’s visit to Algiers is his first official visit. He will meet with his Algerian homologue to discuss issues related to the Arab World and Africa. President Bouteflika has rarely been in public since last July.
The accession of Abdel Fattah al-Sisi to the Egyptian presidency shares similarities with Algeria’s experience. In the early 1990’s, the Algerian army suspended the elections that were expected to be won by the Islamists. The decision led to a fatal civil war that lasted for almost 10years between the military and the Islamists accounting for more than 200,000 lives.
Al-Sisi removed Mohammed Morsi of the Muslim Brotherhood, considered an Islamist party, from power when he was serving in the military. Al-Sisi’s action led to protests that left more than 1400 people dead and around 15,000 in prison.
Al-Sisi’s visit is expected to promote political and economic ties between the two countries. A statement from the Algerian presidency hinted that the two leaders will discuss “issues linked to the situation in the Arab world and Africa.” Since the beginning of the Arab Spring in Tunisia four years ago, the Arab World has been marred with protests against the government with some of them leading to a civil war. Algeria was able to avoid the phenomenon by hiking salaries, announcing piecemeal reforms and lifting a state of emergency that had been in place for 19 years.
Al-Sisi was elected in May in a land sliding victory. He is now faced with the challenge of assuring a peaceful transition. From Algeria, he will head to African Union’s 23rd Ordinary Summit in Guinea Equatorial.