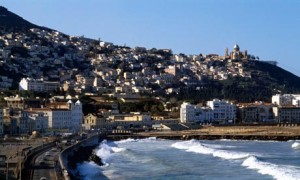 Algeria will be launching a project aimed at revitalizing the Mediterranean bay of Algiers’s as part of an urban development plan. The project is expected to change the “image of Algiers” and make the sea more accessible to the residents with several recreational activities. The project has an estimated cost of €400 million and was requested by President Bouteflika.
Algiers’s Mediterranean bay has been dominated by the view of the cranes and the wall surrounding the port. The water is also polluted by the wastewaters from industries that obliged authorities to ban swimming in the bay. According to Architect Akli Amrouche, the project will be covering a coastline stretch of 67kilometres. He added that “the transformation of the bay, which is at the heart of the new image of Algiers, will help to resolve the paradox of seeing the sea but not accessing it directly or benefiting from it.” Development projects in Algeria’s capital have long been sidelined for industrial developments
Amrouche promised that the bay will be clean after the accomplishment of the project and underlined that “the purpose is to give recreational areas back to the people of Algiers and re-open their access to the sea.” The project will also promote green initiatives that will be combined with modern design in a bid to completely reorganize the city center and restore the old fishing port. Along the cornice, a facility at the mouth of the river is planned for water sports, with other recreational activities while a mosque for 126,000 worshippers will be built with a minaret of 300metres.
The project could increase commercial activity along the bay and probably attract tourists. Residents of Algiers’s have already embraced the project with two hands.