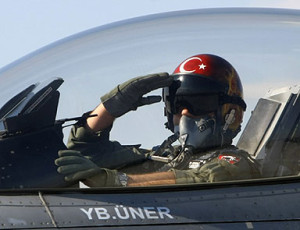 No one in Turkey, which is a regional power and NATO member, thought that Syria would dare to shot down a Turkish military plane on a training mission.
After conducting a forensic review of the sequence of events, the Turkish officials insist that the aircraft was hit in international airspace without warning after mistakenly strayed into Syrian airspace, but Damascus says the shooting was an “accident” and “not an act of aggression”.
According to the Syrians, “an unidentified air target” had violated their airspace while flying fast and low, prompting the anti-aircraft guns to open fire at the “intruder” fighter jet. It was only later found to be a Turkish F-4 phantom. Its wreckage was found in the Mediterranean at a depth of 4,265 feet but the two pilots are still missing.
The incident has further strained already-frayed relations between Damascus and Ankara over the Syrian conflict. The Turkish government is so far showing self- restraint and moving cautiously despite a growing domestic pressure, urging Ankara to take actions. “Whatever must be done will be done”, insist Turkish officials, while their audiovisual media and major newspapers say president Bachar Al Assad “is playing with fire”.
NATO has agreed to a request from Turkey to hold an emergency meeting to discuss a common response to the downing of a Turkish warplane by Syrian air defense system, provided and installed by Russia.
According to some experts, it seems that Ankara, despite its strong language, is seeking a concerted international action against the Syrian regime rather than venturing into a risky unilateral retaliation.