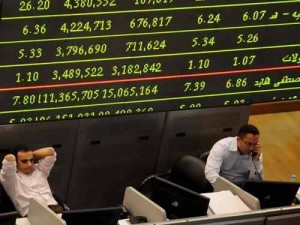 Egypt’s stock market indices have made record gains in 9 years following the victory of Mohammed Morsi of the Muslim Brotherhood in the Egyptian presidential elections.
According to state TV, benchmark stock index, EGX30, on Monday closed with a record gain of 7.6 percent to 4482.48 points, its largest single-day gain in nine years, as investor’s optimism was fuelled by the announcement of the results of the tight presidential race.
Morsi’s election, which ends the political uncertainty that prevailed in the country following the fall of Hosni Mubarak, directly contributed to the stock market rise and the soaring profits, experts say.
State news agency MENA said the exchange closed with a record increase in market value of almost $3 billion. These gains have erased the losses scored over the past week.
Foreigners recorded the highest turnout for buying, especially after the state of political tension and murkiness abated, press reports said.
Stock market indices gains continued on Tuesday morning, as the EGX 30 gained 3.16 percent, earning 142 points to 4,624.
Transactions just shy of LE71 million were made during the Tuesday session.
Egyptian traders tended to sell, recording net sales of LE6.8 million, while Arab and foreign trades were recorded at LE540,000 and LE6,281,000 respectively.
However, if Morsi’s victory was a blessing for the Egyptian stock market, it had an adverse effect on the Tel Aviv Stock Exchange where stocks fell sharply. Major indexes in the Tel Aviv Stock Exchange actually fell over 1% on Monday as a number of foreign institutional investors sold off their holdings.