Human Rights Watch presented on Saturday in Algiers a 94-page report on the situation of human rights in the Tindouf camps located in south western Algeria. 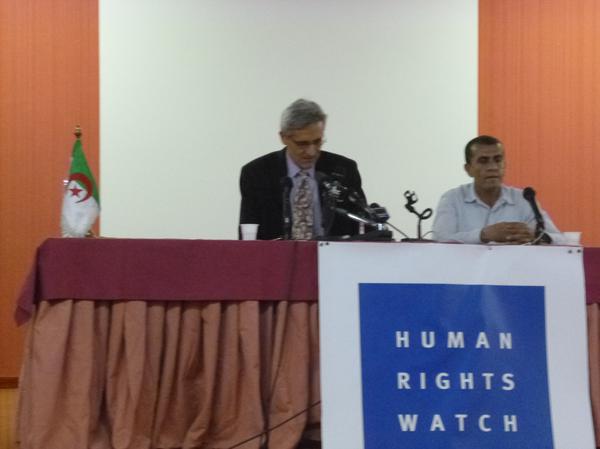 The camps are run by the Algeria-backed Polisario Front, which seeks self-determination for Western Sahara, a former Spanish colony retrieved by Morocco in 1975. Some of the refugees have spent four decades in these remote refugee camps in the Sahara desert near the Algerian city of Tindouf.

The report “Off the Radar: Human Rights In the Tindouf Refugee Camps” which examines current human rights conditions in the camps mentions several forms of human rights violations such as slavery, trial of civilians before military court jurisdictions, politically motivated detentions, forced disappearances, hindrances to political activism, and torture or physical mistreatment of people in the Polisario’s custody among other abuses.

However, when touching on some of the violations found by its searchers, HRW blows hot and cold, alternating contradictory statements. For example the report says that  refugees are “generally able to leave the camps if they wish” and few sentences below it states that the Polisario “regulates travel to the areas of Western Sahara that it controls,” that “some refugees affirm facing difficulties traveling through Algeria outside of Tindouf” and that “Algerian authorities require Sahrawi refugees to obtain permits for travel beyond Tindouf and temporarily confiscate Algerian passports held by Sahrawi refugees upon their arrival at major Algerian entry points.”

The NGO notes that the Polisario says it welcomes human rights monitoring and has posed no obstacles to visits by Human Rights Watch, but acknowledges that its current report, the result of a two-week research mission to the camps in late 2013, is its first update on the human rights situation in the camps since 2008 and is one of the most detailed studies of the subject by an international human rights organization.

The reason for the scarcity of reports on the situation in the Tindouf camps is that Algeria often turns down any requests by international NGOs or even UN bodies to visit the Tindouf camps, conduct a census of the camps populations or meet these populations.

When touching on the freedom of speech, association and assembly, the NGO says it encountered no case of detention for political views or expression but mentions some specific cases such as that of Mustapha Ould Selma who has been clearly detained and exiled for political motives or that of El Khalil Ahmed, a senior Polisario official, detained by Algerian authorities incommunicado since 2009, according to his family.

HRW, quoting refugees, says the Polisario generally tolerates to be criticized openly but concedes, however, that “few dissident groups appear to have formed in recent years,” that there are “allegations of occasional efforts by authorities to curb political activism” and that “the Polisario monopolizes political discourse in the camps.”

Opposition to its fundamental goal of political self-determination for Western Sahara is rarely heard, commented the NGO.

Self-determination to the population of the disputed territory was suggested in the early 80s and Morocco proposed a referendum on the option. But the UN officials supervising the project and many other international experts came to the conclusion that the proposal was unworkable.

Morocco has proposed an autonomy plan for the disputed territory in 2007 but the Polisario and its Algerian mentors stick to the self-determination referendum. As the deadlock continues, the prospects of a lasting settlement and the return of refugees to their homeland remain elusive.