Iraqi Prime Minister Haider Al-Abadi is in Jordan to honor King Abdullah’s direct invitation that was extended to him during the just concluded UN General Assembly in New York. The visit was an opportunity for the two countries to have discussions centered on their bilateral ties, regional matters and cooperation in projects that will empower the developmental aspirations of the two countries. Prime Minister Al-Abadi had separate meetings with the King and the Prime Minster of Jordan. 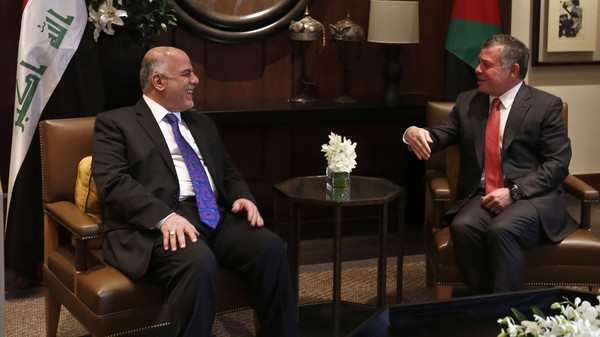 A released statement from the Royal Hashemite Court after a meeting between the two men showed concerns about security challenges that Iraq is undergoing especially in its fight against the militants of the Islamic State. The statement read that Iraq’s security is a central “pillar” in the region’s security and voiced out its support for a “united Iraq.”

A meeting between the two Prime Ministers was a moment to renew the commitment of their governments to engage in fruitful bilateral cooperation. The ongoing $18 billion dollar project that will extend the pipeline linking both countries to the Gulf of Aqaba in Jordan was among the projects discussed. Upon completion, the project will enable Iraq to export it oil to the international market as well as ease Jordan’s chronic energy shortages.

Rafid Jabouri, a spokesman for the Iraqi Prime Minister added that “Abadi is totally open to wide-ranging relations with Arab and regional neighbors” and “there is a genuine desire for us to coordinate with all countries and at all levels” because there is only one “danger” in the region; terrorism.