Interim President Michel Kafando has named Lieutenant Colonel Isaac Zida as Prime Minister of the one-year transitional government that should end with the election of a civilian government. Both Kafando and Zida will not be eligible for next year’s elections. The announcement was received with mixed feelings and analysts saw it as a sign that the military is not ready to move away from political power. Blaise Compaore and Thomas Sankara were all soldiers when they took power. 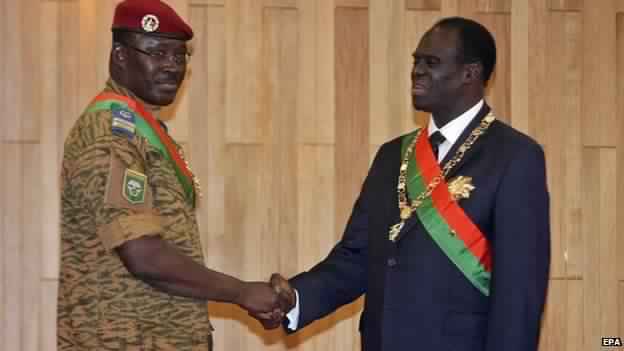 Kafando, a 72-year-old veteran diplomat, vowed that the country will not become a “banana republic” during his swearing-in ceremony.

Zida urged the international community to accompany the country “without prejudice” and gave assurances that the government will not embark on “selfish calculations.”

Civilians consider Zida’s appointment as a betrayal of their “revolution” and Guy Herve Kam, spokesman for the Citizen Broom association said “we are worried, but that’s all.”

There are reports that Western diplomats have advised against Zida’s nomination.

A senior military official revealed that the military and the politicians had a gentleman agreement. He said that “it was on this understanding that we gave the post of president… to civilians.”

Politicians were supportive of his nomination. Ablasse Ouedraogo, president of the Le Faso Autrement political party described Zida as “a capable man” with a “vision” for the country. The head of the opposition UNIR/PS movement, Benewende Stanislas Sankara, called the nomination “a useful compromise” that will ease the transitional process.

Meanwhile Blaise Compaore arrived in Morocco from Ivory Coast for a “fixed-term visit” according to the official Moroccan news agency, MAP. A source in the Ivorian president’s office said that he is accompanied by his wife and family members.