King Mohammed VI of Morocco made a plea to give Africa its rightful place in the global human rights architecture and to have the continent play a part in determining human rights standards. 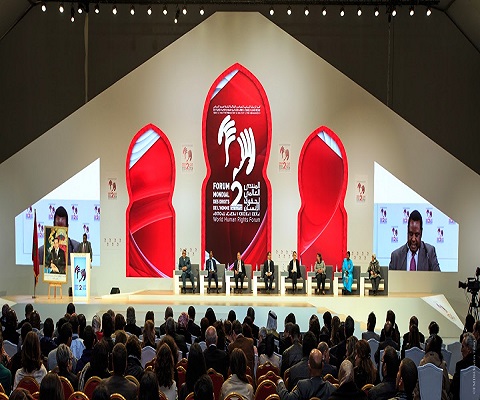 In a message read out on his behalf at the opening of the second World Human Rights Forum held in Marrakesh November 27-30, King Mohammed VI pointed out that countries in the developing world – particularly in Africa – “no longer want to remain a subject for debate and assessment, or to be a field of experimentation.”

After he recalled that major international human rights instruments were developed in the absence of Africa, he pointed out that since Africa did not have the opportunity to contribute to developing the international human rights law, it “should be given the opportunity to enrich it with its own culture, history and genius, thus increasing the continent’s chances to fully embrace it.”

“Africa cannot remain a mere consumer of international standards devised in its absence. Africa can no longer be the invariable object of international reports and external evaluations. Our continent has become mature enough to claim its rightful place in the global human rights architecture and to fully play its role in it,” King Mohammed VI insisted. He argued that “universal values are common to us all, but the pathways we take are not. This is the motto of a responsible Africa which is fully committed to human rights, a continent that can no longer remain the eternal subject for human rights debates.”

“Africa wants to be heard, it wants to make a contribution to devising standards that are truly universal. Our continent does not want to be kept on the sidelines when it comes to human rights, which concern Africa too,” he went on to say, insisting that universal values acquire greater legitimacy when they represent and protect human diversity, and when all peoples and cultures contribute to shaping them, ultimately considering them as their own.

The King also pointed out that new challenges requiring an urgent response have emerged and that international human rights law has evolved since the adoption of the 1993 Vienna Declaration and Program of Action. The international human rights agenda has also witnessed far-reaching changes and new areas of interest have emerged, such as the protection of the rights of the elderly, human rights in the digital age, human rights and the corporate sector, the legal empowerment of the poor and the enforceability of economic and social rights, he said.

The over 7000 participants from nearly 100 countries that attended the World Human Rights Forum actually debated all the issues mentioned in the royal message and many other aspects of human rights with a special focus on the rights of women and children, the right to education, the right to freedom of worship, the right to information among others.

Four major global issues, namely the 20th anniversary of the Beijing Declaration and the Global Program of Action + 20 on the rights of women; the post-2015 development goals to be at the focus of an international meeting in September 2015 in New York; international migration and the right of refugees and asylum seekers; and environment and climate change on the eve of the 21st International Climate Conference in Paris (COP 21) were debated at the level of workshops and round tables that resulted in reports compiling a number of recommendations and concrete proposals.