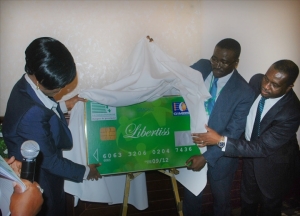 GIM-UEMOA is the interbank network that provides the electronic banking transactions through credit cards. The credit card provides several advantages to banks and also to individuals.

“You will find that when banks issue currencies few days, notes are damaged. It’s a shortfall for the banks which have to spend more to print the notes. We must go to the dematerialization of the currencies “, said Georges Kuassi, member of the network. “Africa must not remain on the sidelines of this economic dynamism” added Mr Geoges Kuassi.

The Central Bank of West African States (BCEAO) has initiated a major project to modernize payment systems. One of its major components is the introduction of an interbank system of withdrawal and payment credit card at the eight states of the West African Economic and Monetary Union. GIM-UEMOA is responsible for the management of the interbank electronic banking in all its regulatory and operational dimensions