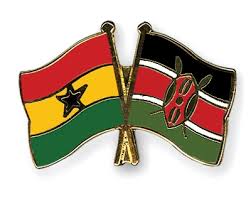 Kenya and Ghana have stated their desire to renew the ties between them with the pre-independence bonds established by Ghana’s first President, Dr. Kwame Nkrumah and Kenya’s founding President, Mzee Jomo Kenyatta serving as its foundation at the end of the three day visit of President John Dramani Mahama to Nairobi. It was the first time that a sitting Ghanaian president visited the country. Several agreements that will bolster economic developments were signed.

Presdeint Uhuru Kenyatta welcomed his Ghanaian counterpart with whom he discussed plans of their countries serving as effective sub-regional aviation hubs in their respective regions. Ghana is the second largest economy in West Africa after Nigeria while Kenya occupies the first position in East Africa. Plans to develop intra-African trade and means of avoiding double taxation as well as the protection of investments of their citizens were considered by the two Head of States.

After the discussions, two of the concluded agreements centered on the development of partnerships in air services and trade, while the five others focused on tourism, agriculture, energy, oil and gas, information and communications technology and education. Some elements of the agreements include efforts to reduce the cost of doing business between the two countries, co-operation in tourism training, and the exchange of technical information in agriculture.

The two presidents also spoke about regional issues. Kenya has been experiencing terrorist acts and insecurity especially along its border with Somalia. Ghana had to assure that it avoided Ebola from spilling into the country as its regional neighbors; Guinea, Liberia and Sierra Leone continue to battle against the virus.

Both leaders also commended each other for their leadership as head of Economic Community of West African States and as Chairman of the East Africa Community respectively.