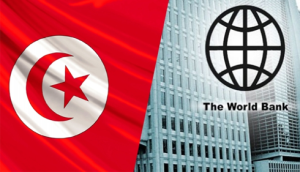 The Tunisian’s minister of Economy and Finance Hakim Ben Hammouda, said on the sidelines of a meeting organized by the Tunisian Institute for Competitiveness and Quantitative Studies, that the World Bank will grant Tunisia two loans of 500 million dollars in the first quarter of 2015.

According to Mr. Ben Hammouda quoted by the Tunisian official news agency, the first credit of $ 250 million will be provided in January 2015 and the second loan of the same amount will be paid in March.

“The decision by the International Monetary Fund on the 12th December about the disbursement of the fifth installments of the guarantee credit agreement with Tunisia is likely to encourage financial institutions to further support Tunisia during the next years,” said Mr. Ben Hammouda .

The Minister has also expressed his desire that Tunisia will head the list of less indebted countries when several rating agencies are preparing to publish their reports in the first quarter of 2015.
“Following the rating of 2010 requirements, great efforts have been made at all levels and will continue for next 4 or 5 years”.