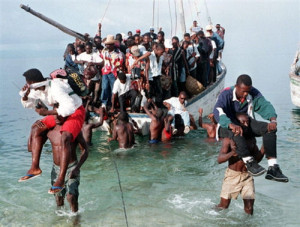 A boat on the Ubangi River carrying people and goods has sank with more than 30 tons of goods.  The Congo Business Federation and the Office of civil society of Isangi estimate that more than 30 tons of goods have lost in the shipwreck on the Congo River on 23rd December in the Orientale’s district. The two organizations have delivered this figure in a press release. These goods consist mainly of manufactured goods and bags of beans.

Since the shipwreck whose final investigation has not yet been produced, the economic activities have slowed down in Isangi and the general market Yafira. According to the local president of the FEC, Dieudonné Lobanga, this market is almost empty. The wrecked ship should supply the market for the end of year celebration activities.

According to testimonies collected by several Congolese newspapers, the price of products such as beans, salt, sugar and soap have risen.

The ship ” ville Yalotsha ” sank on Tuesday, 23rd December on the Congo River in Isangi. It could has hit a rock. About 300 people are missing.