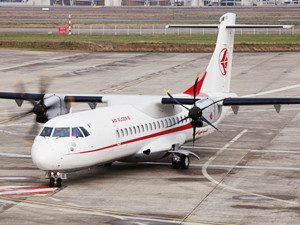 The Algerian national airline company, Air Algeria has received last week at the international airport of Algiers, the first plane of a series of 16 new planes ordered in January 2014 from the American plane maker Boeing, Airbus and ATR.

This new aircraft named ATR 72-600 of 66 seats cost $ 21.2 million, said the Algerian Transport Minister Amar Ghoul, during the reception ceremony. The national company also intends to acquire two similar aircraft that will be received in June 2015 and June 2016. They are also planning to buy eight aircraft of Boeing 737-800 of 148 seats each in July and December 2015 and in April, June, August, October, November and December 2016. Two other Boeing 737-700 of 112 seats each will be received in May and September 2016. The amount paid for each of these ten Boeing is $ 65 million dollars.

In addition, three other Airbus A330-200 of 251 seats at a cost of 120 million dollars each will be delivered in March, May and June 2015. The total amount of acquisition of the new fleet of aircraft of Air Algeria represents $ 1.073 billion. These acquisitions are in the implementation framework of the medium-term development plan of the national company (2013-2017), which aims to improve its profitability and competitiveness in an Algerian market served by 20 airlines, including 18 foreign airlines.

Air Algeria had published in 2013 a restricted international tender for the acquisition of 16 new aircrafts including two cargos, following which it had signed in January 2014, three contracts order with Boeing, Airbus and ATR.

These new acquisitions will enable Air Algeria, which currently has 42 aircrafts to continue the process of renewing its fleet with new aircrafts. The new devices are intended to also strengthen its domestic network and expand its international network particularly on the African continent.