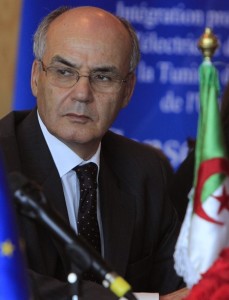 Energy Minister Youcef Yousfi has called on the Organization of the Petroleum Exporting Countries (OPEC) to defend the interest of its members rather than letting the market decide oil prices during a news conference. He wants the organization to take the necessary measures that will increase the prices which is presently fluctuating below $60. Several oil producing countries have raised similar concerns but OPEC decided to maintain current production levels during its last meeting held this month.

Minister Yousfi believes that OPEC should defend the interests of its members by cutting output so that prices will go up. Algeria’s economy heavily depends on oil and the falling global prices have already forced the government to take some measures. During the weekend, Prime Minster Abdelmalek Sellal announced that employment by the public sector will be temporarily suspended as well as major infrastructure projects. Around 60% of the jobs in the country are in the public sector.

Yousfi stated that Algeria does not support the opinions of the big producers in OPEC who claim that the oil prices can be regulated by the market. Saudi Arabia has openly defended such claims although observers believe that it is backed by political ambitions. Yousfi is expecting the oil prices to fluctuate between $60 and $70 next year before reaching $80 and above by 2016.

Several oil producing countries have been calling for production to be reduced but they want it to be a general because none of them wants to lose its share in the global market. Minster Yousfi wants a meeting between OPEC members and oil producing non-members to find a solution.

Algeria has foreign reserves of $200 billion. Oil revenue provides 97% of its hard currency and 60% of its budget.