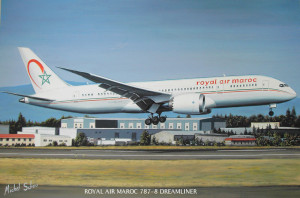 The Moroccan national company officially took delivery on Friday night in Everett its first 787-8, registration CN-RGB, and landed in Casablanca on the 3rdJanuary, 2015in the morning.It is configured toaccommodate18 passengersin Business Classand256 inEconomy, a total of 274seats.

The national company is expecting a second Dreamliner in March and the next two others in March and April 2016. With this acquisition, the fleet of RAM now has 53 devices and becomes the first company of the Mediterranean to develop this new generation of Boeing equipped with technology for civil aviation.

The inaugural commercial flight of the 787-8 Royal Air Maroc is scheduled on the 20th January on a daily rotation between Casablanca Mohammed V and Paris-Orly airport.

More fuel efficient thanks to a massive use of composite materials; the Boeing 787-8 Dreamliner consumes 20% less than other long-haul aircrafts. The plane, whose CO2 emissions are 20% lower than other similar devices, is also offering a range of more than 1,500 km/hour.