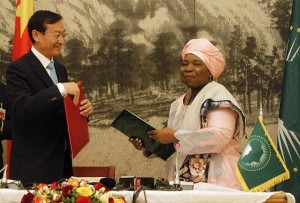 The African Union (AU) and China have signed on the 27th January in Addis Ababa, a memorandum of understanding on an infrastructure project to link African capitals by roads, high speed trains and air services. The Chairperson of the AU Commission, Nkosazana Dlamini-Zuma and Chinese vice Minister of Foreign Affairs, Zhang Ming, initiated the memorandum of understanding which also includes a component on the industrialization of the continent.

“This is the most important document ever signed by the African Union with a partner,” Dlamini-Zuma said at the end of the ceremony, few days before the 24th Summit of Heads of State and Governments which was opened on Friday 30th January.
“This is the agreement of the Century”, launched the Chinese vice Minister of Foreign Affairs Zhang Ming.

“Africa is a vast continent where people would have to travel without passing through Paris,” he added.
According to Zhang Ming, the agreement includes cooperation in infrastructure and industrialization, which will be conducted in the framework of cooperation that combines China and the AU because the AU plays a coordinating role in the implementation of their development.

China has rich experience and proven technologies in the areas of high-speed railways, highways, aviation and industrialization projects, he has said

The project lies within the framework of the implementation of the “Agenda 2063” prepared by the AU and which aims to build an integrated and prosperous Africa on that date. No detail, however, filtered out about the infrastructure that should be built and the financing of the project.

During a tour in Africa conducted in May 2014, the Chinese Premier Li Keqiang said that he had “dreams of seeing all African capitals interconnected through high-speed trains to strengthen regional integration and development”. The Chinese leader had then said that his country has the technology in this area and they are “ready to cooperate with Africa to make this dream a reality.”

Commenting on China-Africa relationships, Ms. Dlamini-Zuma stressed that the two countries have been enjoying long-term historical relationships and a growing cooperation.
“In our discussions, we agreed that we needed to cooperate with China in a number of areas at the continental level, mainly in the infrastructure sector,” mentioned the President of the Commission of the AU, Dlamini-Zuma.

“This will be the first joint project of African continent and China for years,” she said. “This relationship, in particular the cooperation in this context, takes another dimension, a higher level.”