Prime Minister-designate Essid is expected to present his cabinet to the parliament on Wednesday after brokering a deal with some opposition parties that were against the first proposal that he was about to present last week. He could be announcing the members of his cabinet on Monday which will include Ennahda, the second largest party in the parliament. 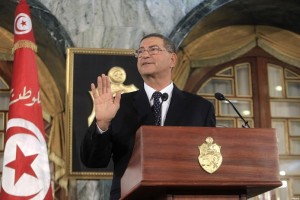 Ennahda has always said that it will support a unity government and its leader, Rached Ghannouchi, told reporters shortly after a meeting with Essid that “the future looks good” and the party will participate in the government. Sources close to the party revealed that Ennahda will occupy two cabinet ministers and two state ministers in the new cabinet.

The last cabinet formed by Essid didn’t include Ennahda and was dominated by former members of the Ben Ali regime. According to Yassin Brahim leader of the liberal Afek Tounes party, which was also left out in the previous cabinet, the newly formed one also includes his party alongside ULP.

With the participation of these three opposition parties in Essid’s cabinet, the needed majority of at least 109 votes can easily be obtained. However, representatives from the leftist Popular Front have rejected Essid’s new cabinet partly because it contained former officials from Ben Ali’s regime, some of whom they said were suspected of corruption in the past.

The next government will have to fight against the insecurity posed by Islamist terrorist groups especially in the Chaambi Mountains along its border with Algeria. The war in Libya also threatens its stability.

The Tunisian economy was paralyzed by the protests that brought an end to the Ben Ali regime and the government is expected to take drastic measures in order to revive it.