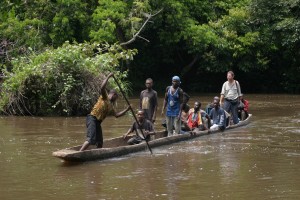 The Congolese Board of waterways (RVF) said that they are waiting for aid from the European Union (EU) estimated at about 60 million to mark up work on the Congo River. The technical director of the governed, Gabriel Mokango, who spoke on Friday, February 27th, has reported that this aid is expected in four years.

“The big problem with the EU is the disbursement procedures which are very long. We are on the fourth year of the program with the EU, but we are still waiting, “said Gabriel Mokango.

This EU funding for mark up work on the Congo River is part of the 10th European Development Fund (EDF), which is part of the support project of the European organization of airworthiness, waterways and lake.

For its part, the EU speaks “problems” encountered in the implementation of the disbursement of the money.

“We had problems but not a problem originates in the procedures that are well known and well-established in the EU,” said Bruno Hansens, member of the EU delegation in the DRC.

The project to support the navigability of river and lake routes is an EU project that includes several additional points’ endowment to beacon. The agreement signed between the EU and the Congolese government dates back to 2010. The operational implementation deadline is scheduled for December 2016.