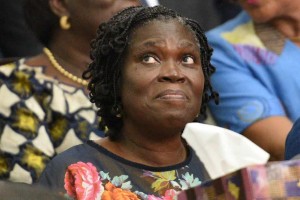 Simone Gbagbo, wife of former president Laurent Gbagbo, has been sentenced to 20 years imprisonment for disturbing the peace, forming and organizing armed gangs and undermining state security during the post electoral violence which followed after Gbagbo refused to acknowledge his defeat to Alassane Ouattara, current president, in the 2010 elections. The sentence could hamper reconciliation efforts in the country as presidential elections are scheduled to take place in October but the president is expected to offer an amnesty.

Around 3000 people were killed during the violence which escalated into a civil war.

Dubbed as the ‘Iron Lady’, Simone’s lawyers have criticized the ruling claiming that the country is in need of reconciliation and not the exploitation of the criminal justice system. Pro-Gbagbo supporters are claiming that it is a victor’s justice because nobody from the Ouattara camp that has been tried.

Simone was tried together with 82 other people and they have all been found guilty. The former president’s son, Michel Gbagbo, was also convicted and sentenced to five years in prison. Ivory Coast refused to extradite Simone to the International Criminal Court where she is accused of crimes against humanity. His husband is already in Hague facing similar charges.

The leader of the Ivorian Popular Front (IPF) Alphonse Douati said negotiations have been going on with the government to grant Simone some type of amnesty.

In January, President Ouattara said “once the verdict is in, obviously the head of state has a certain amount of authority in terms of pardons and amnesty to propose to the National Assembly.”

During her trial, Simone said she is ready to forgive “because if we do not forgive, the country faces a crisis worse than what we experienced.”