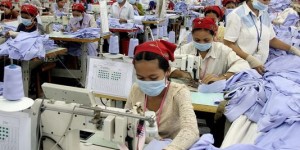 The Moroccan textile industry is committed to create 90,000 jobs by 2020, according to the terms of a performance agreement signed at the end of February by the Moroccan Association of Textile and Clothing (AMITH), The Moroccan Ministries of Industry and Economy and Finance.

The agreement was signed in the framework of the 2014 -2020 industrial Acceleration Plan, launched in April 2014. A total of 57 projects led by industry-leading companies were identified and the sector has also pledged to increase exports to 464 million by 2020.

In return, to help fulfill its objectives, the State agrees to rent to the 95 hectares sector operators at preferential prices and provide subsidy – without specifying what amount – through the Industrial Development Fund will be endowed with € 1.8 billion.

This performance contract was signed a few days before the recent skirmish between AMITH and the High Commission for Planning (HCP), around the figures of employment in textiles. About 37,000 jobs lost by the industry in 2014, 32,000 jobs are the fact of a textile according to the HCP. Information is quickly contradicted by AMITH ensuring that the sector is doing well.

After a growth of 8% per annum during the 90s, the Moroccan textile and clothing is in decline since the early 2000s, partly because of the tough competition from China.

In fact, “Having experienced an average annual growth rate of the added value by 17% during the decade of 80s and sustained growth of 8% during the 90s, the domestic textile industry and clothing is registered in the past decade in a down cycle with a weight in the overall value of the country rose from 4.5% to 2.7% between 2000 and 2013. […] The textile and clothing  lost market share over the same period from 0.63% to 0.51% for textiles and 0.33% to 0.28% for clothing, “according to the Economic Report and financial 2015, the Moroccan Ministry of Economy.