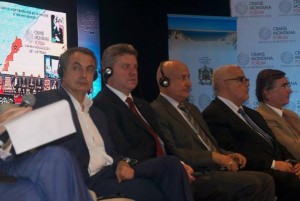 The Crans Montana Forum has set up, on the sidelines of its conference held in the Southern Moroccan City of Dakhla this March 12 through 14, The Atlantic Africa Club, that is meant to contribute to the global integration of the African continent.

The Club, dedicated to bolstering cooperation between the African States bordering on the Atlantic, aims to bring together key business, political and financial stakeholders from the region.

In a message he addressed to the Forum, King Mohammed VI of Morocco welcomed the initiative as an implement to promote cooperation among African countries bordering on the Atlantic. The setting up of the Club “reflects a shared desire to support development and regional integration in Africa and foster a more proactive policy regarding the Atlantic coast,” he said, acknowledging that for many years, this important dimension of Pan-African action has been neglected.

“Far from being an obstacle, the Atlantic Ocean is a key element conducive to development. It can be a bridge for fostering more openness, interaction and integration between African countries bordering the Atlantic,” he said.

The project initiators actually expect the Club to be a platform for enhancing regional cooperation on the Atlantic coast of Africa, and at the same time opening up the region onto the world.

They also expect the Club to become a necessary operational support to the policies implemented by and between African states bordering the Atlantic, which represent 46% of the African population, concentrate 55% of Africa’s GDP and realize 57% of overall African trade.

The Crans Montana Forum leaders argue that “only a concerted management and a comprehensive integrated approach to the major common problems can enable coastal States to address these problems, promote international cooperation and prevent tensions that may well be entailed by these problems.”

“Today, peace and security as well as the prevention and fight against transnational threats are essential priorities for every government in the world,” they say. They also deem that only a concerted, collective and trans-regional solution to migration-related problems “will transform what is considered as a violent and painful reality into an added value and into a source of growth for each state.”

The Forum officials insist that only cooperation, both international and regional, can ward off the multifaceted threats endangering States’ security, such as terrorism, crimes related to trafficking of drugs, weapons, and human beings and piracy. The response to these threats requires concerted, inclusive and supportive action, as well as the implementation of comprehensive strategies between the states bordering the Atlantic to protect the open sea and to monitor land borders.

At the economic scale, and part of the Forum’s sustainable growth strategies, the Club will promote a “smart” management of fishery resources and develop production and global marketing of fisheries products.

Likewise, it will contribute to the preservation of the natural coastline and help exploit the existing huge opportunities for the development of a responsible tourism industry, say the Forum officials.

The Atlantic Africa Club will hold its first plenary session in Brussels next June 13 on the sidelines of the annual meeting of the Crans Montana Forum.