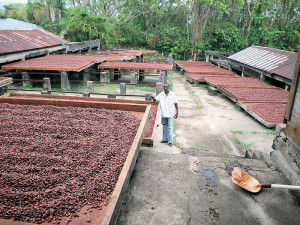 The Cameroonian’s government is planning to double its annual capacity of cocoa processing. According to Reuters, the country wants to succeed in transforming locally around 70,000 tons of beans or about 30% of all production. This increase will be through the establishment of 10 new processing units said Bruno Ntakeu, Deputy Director of the transformation the Ministry of Trade and Industry.

According to the official, the project will require an investment of 3.2 billion FCFA and will transform 36,000 tons of beans butter and cocoa powder, which ultimately will generate more income in the country. These production units will join the Sic-Cacaos, Chococam and the Company Chérifienne Chocolaterie which are the three companies currently active in the processing sector in Cameroon.

Note that Cameroon benefits from favorable agricultural conditions giving it as one of the best primary commodity for economies in the sub-Saharan Africa region. Cameroon’s principal commercial crops are cotton, tobacco and bananas while sugarcane palm products and rubber are also growing commercially.