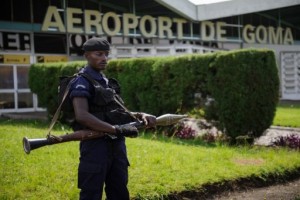 The World Bank has announced on the 13th March, in a statement, that the institution has granted to the Democratic Republic of Congo an amount of $ 52 million to finance the renovation of Goma airport, main gateway to the east of the country for international traffic and vital link to the rest of the country.

The single runway and taxiway to the Goma airport was damaged by the eruption of the Nyiragongo volcano in 2002, which limited the delivery of humanitarian and United Nations operations and passenger traffic and cargo. The airport was also the theater of conflict also for decades and fell several times under rebel control.

The grant from the International Development Association, an institution of the World Bank dedicated to the poorest countries, will help improve the safety, security and operation of the airport. It will repair the traffic track, the current terminal and the electrical system, but also to build a control tower and equipment to optimize air navigation. The work of the site’s security fence will be completed, along with the provision of equipment and training to firefighters and emergency attached to the airport.

Another component of the project is to strengthen the airport organization, to share the lessons of interventions on other airports in the country, to reduce the risks of volcanic activity in the region and promote provisions for communities living near the site to enjoy its social benefits. “The geographical isolation of the east, completely landlocked, coupled with the poor state of airport infrastructure, following decades of conflict, is a serious threat to the current efforts for peace consolidation,” says the Director of Operations World Bank DR Congo, Ahmadou Moustapha Ndiaye.