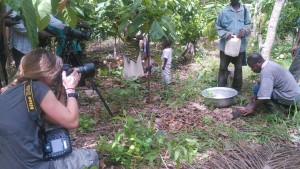 A delegation of Italian journalists and documentary filmmakers has been staying in Lomé since Monday for a mission of the Italian National Television.

According to the website africatopsuccess which report the information, the objective is to carry out several audiovisual documentaries on Togolese cocoa from the nursery to the transformation through planting, harvesting, fermenting and drying. Part of the work will be devoted to Togolese chocolate which is selling beyond national borders since 2013.

According to the documentary film maker Illy, Head of the delegation, the work to be carried out for a week in Togo will meet many farmers and stakeholders in the cocoa chain in Togo to discuss all the issues and challenges in this sector.

She added that various documentaries commissioned by the Italian Television come ahead of the Milan World fair that will be held in the coming months in Italy.
Recall that since 2013, a group of young Togolese entrepreneurs are on a mission to create Africa’s own prestigious, world class chocolate brand, using only local ingredients that have been sustainably produced.
While ‘Chocotogo’ may not be able to compete with bigger, more established global brands yet, its creators believe that are producing locally manufactured goods and products using available resources is one way to combat youth unemployment and poverty on the continent.