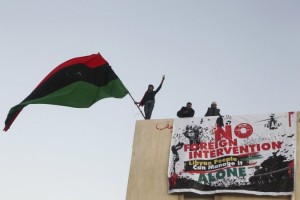 Libyan Chargé d’affair in Washington Wafa Bugaighis has told reporters during a roundtable discussion that the internationally recognized government is not looking forward to foreign intervention to end the crises in the North African country but rather support in the form of military training and hardware and counterterrorism intelligence.

She fears that the American idea of carrying out airstrikes on Islamist held positions in the country will quickly turn Libya in to “a land for the jihadists from all over” as she estimates that 5000 Islamists fighters loyal to ISIS and ISIL are already on the ground.

Bugaighis urged the West to support the “legitimate and democratically elected” government that is based in Tobruk to avoid Libya becoming a breeding ground for terrorists stressing that “time is of essence”. The Tripoli based government and parliament was described as being “self-proclaimed and completely illegitimate.” Bugaighis added that if Prime Minister Thinni’s government gets the military and intelligence support needed, they can take care of the Islamists as she argues that stopping the extremists from having access to funds and arms are the main challenges. She also stressed that they want to support their own institution, by equipping it, training it and enabling it to fight on its own.

The Obama administration has been very careful in its dealing with Libya after the assassination of Ambassador J. Christopher Stevens and three other Americans in 2012. Bugaighis wishes that Washington could introduce a more aggressive approach to contain the Islamists especially after the rise of a group pledging allegiance to the Islamic State. 21 Egyptian Coptic Christians were killed by the group prompting Cairo to launch an airstrike on their positions. Bugaighis said the strike was coordinated with Tobruk and it was a “one-time” event.