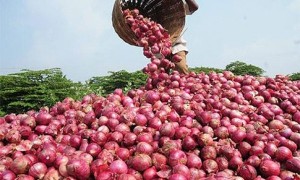 According to a recent report of the Ivorian government; the country’s national onion production covers only 5% of internal needs. This situation forced the country to import the rest of its consumption, from the countries of the region, with an annual bill of about 30 billion CFA francs.

According to Je Bi, who chairs the Inter-profession association of onion sellers in Côte d’Ivoire (IOCI), this situation could change if the State decides to engage with stakeholders in the sector.

“What we are asking the state is the political will, as if politicians are interested in onion production as cash crops such as cocoa and coffee, it can give employment for the youth and women, “she said.

Beyond the desired state commitment, the association thinks that the introduction of the cultivation of onion could change that. Also she initiated a project in this direction with the support of the Programme for the promotion of the agricultural sector and biodiversity (ProFIAB).

Listing the challenges that the organization and its partners will have to overcome for the emergence of an onion diet ‘high in Ivory Coast, Dr. Frank Kuklinski who heads the Ivorian mission ProFiAB has highlighted the weakness in the producer’s organization and the mastering of production techniques. He also pointed out the seed quality and level of input use and other pesticides.

If her side Je Bi focused on the lack of statistics in the real sector, there is no doubt that industry leaders already have their eyes to a future where, like what is currently experiencing Senegal, horticulturists will require the State to limit the importations.