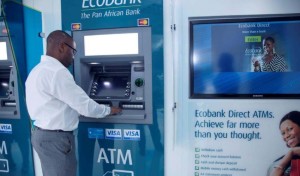 The pan-African banking group Ecobank Transnational Incorporated has published on April 20th, its accounts for the year 2014, showing a profit before taxes of $ 434 million, an increase of 13% compared to that of 2013.

Behind this overall figure, it appears a more discreet indication that the commissions on automated teller machines operations (ATM) accounted at the end of December 2014, is 7% of the proceeds from other activities that the placement of credit and related services, for a total of $ 84 million. This figure fall improvement, when compared to the $ 41 million collected by the group in this segment over the first 9 months of 2013.

The group had in 2013 over 2,300 ATM spread over approximately 10,000 points of sale was committed to improving the user experience of the service which, like all other segments generating the collection of fees and commissions, provides a solid basis for its activities. In total, Ecobank will be charged on yearly basis, a total of $ 624 million fee and various commissions, of $ 480 million for monetary transactions and securities.

In the report of the banking group, it appears that the bank has provided more loans to its English speaking countries such as Ghana and Nigeria.

When publishing its results, the Pan-African banking group Ecobank Transnational Incorporated said it had awarded a total of $ 12.3 billion of loans on behalf of 2014. This represents an 8% increase in relative and of $ 890 million in absolute terms, when compared to that of 2013. The ECOWAS zone has been the biggest beneficiary of outstanding volume, with a total of $ 9.58 billion of loans granted by ETI.

Nigeria remains the most important market for the credit market at Ecobank, with $ 4.81 billion received from the bank, a figure which has risen compared to 2013.