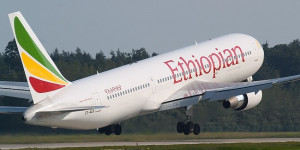 The Ethiopian Airlines has announced on the 29th April, the launch of its first direct flight between its hub in Addis Ababa and Tokyo’s Narita airport, Japan.

Operated in an apparatus configured to accommodate 24 passengers in business class and 246 in economy class, the flights depart three times a week, Monday, Wednesday and Friday at 22:15 from Addis Ababa to arrive the next day at 13:15 to Hong Kong, and start at 14:25 and land in Narita at 19:30.

These flights are operated by codeshare with All Nippon Airways.

“With this unique direct service between Africa and Japan, our flights to Narita will give to our customers, the best possible connectivity options,” said Tewolde Gebremariam, CEO of Ethiopian airline, who welcomed the important role that Ethiopian Airlines will play in the tourism and economic exchanges between “Africa, the second region with the highest development in the world and the highly industrialized Japan, the third largest economy in the world”.

Note that the launch of the Ethiopia-Japan route was decided by the governments of the two countries in December 2013.

In Africa, Ethiopian Airlines currently operates flights between Addis Ababa and 49 cities. Using transfers at the Ethiopian capital to those cities will improve convenience for passengers travelling between Africa and Japan, who previously had to transit mainly in Europe, airline officials said.