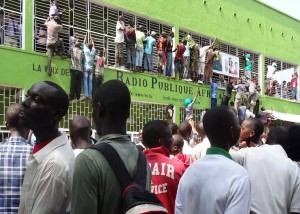 Crackdown continues in Burundi as a court in Bujumbura summons the manager of one of the private radios that aired the coup message read out by Gen Godefroid Niyombare, coup ringleader.

Innocent Muhozi, manager of “Rennaissance” radio-television station,  has been summoned to the court on Friday to answer questions in the framework of investigations related to May 13 failed coup.

He told journalists that the warrant sent to him on Thursday said he was to answer questions related to the investigation linked with the failed coup.

He said he initially wanted to show up but he was afraid after receiving worrying messages.

“I wanted to show up at the court but I am receiving worrying messages”, Mr Muhozi said.

“They can say that I relayed Godefroid Nyombare’s message so I supported the coup. It means that I can be sent to prison from tomorrow, I don’t want to go to prison.” He added.

He is scared to be sent to prison like other coup leaders. 18 of them have already appeared before the court.

All private radio and television stations have been closed following the coup after loyal forces and militia pro ruling Pierre Nkurunziza accused them of backing the coup.

Other managers of three other prominent radio and television stations have also been on the run fearing government crackdown.

“All my colleagues are on the run”, Mr Muhozi said before adding “Managers of Isanganiro, RPA, Bonesha, have fled Bujumbura.”

Loyal forces have blocked access to private radio and television stations despite a statement by the presidency saying those stations may resume working.