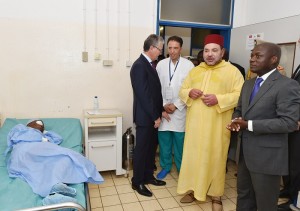 President of Guinea-Bissau José Mario Vaz hailed the Moroccan King’s endeavors for the development of Africa and the building up of an inclusive and “win-win” South-South partnership serving the interests of African people.

In a joint statement released following the historic visit paid by the Moroccan sovereign to Guinea-Bissau May 28-30, second leg of his current African tour, President Mario Vaz voiced his country’s “unconditional support” for Morocco’s sovereignty over Western Sahara.

The two African leaders agree that economic growth helps to improve the living conditions of African people and foster political stability. They also stressed the need to coordinate actions to ward off security threats and combat organized crime, urging the international community to prop up the efforts aiming at promoting the rule of law.

In a bid to help Guinea-Bissau solve its water shortage and boost the production of drinking water in the capital city of Bissau, Morocco donated the West-African country water pumps, electricity generators and chlorination systems.

For its part, the Simao Mendes hospital of Bissau benefited from a substantial Moroccan medical grant consisting of TB & antiretroviral drugs, in addition to antibiotics, painkillers, trachoma screening and cataract surgery apparatus.

A whole ward of this hospital is run and operated by a highly qualified and experienced Moroccan medical team which offers critical medical services and treatments to patients in various specialities.

During his trip to Guinea-Bissau, King Mohammed VI also donated 10,000 copies of Holy Quran to Mosques of the West African country.

Morocco spearheads a successful international training program for Imams preaching the precepts of a tolerant and non-violent form of Islam based on Maliki rites.

In a message sent to President José Mario Vaz at the end of his visit to Guinea-Bissau, the Moroccan sovereign expressed commitment to further reinforce cooperation ties with this African country and pledged to back its reconstruction and development efforts.

After having visited Senegal and Guinea-Bissau, King Mohammed VI flew to Côte d’Ivoire, the third leg of an African tour that will also take the monarch to Gabon.