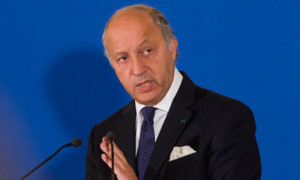 The French Foreign Minister, Laurent Fabius requested the G7 nations to act against Climate Change and invest in clean energy sources in Africa. He also called on the Group of Seven leading industrialized countries to boost investment in renewable energy projects in Africa to offset the impact the continent’s economic rise is likely to have on global carbon emissions.

He said that the nations should focus on decarburization and aim for a significant decrease in greenhouse gases (GHGs). “We want to adopt a target for global reduction of 40 to 70 per cent of greenhouse gases between 2010 and 2050,” Fabius told the French daily Le Monde, citing IPCC (Intergovernmental Panel on Climate Change) recommendations.

Fabius said that G7 countries, some of the richest in the world, needed to commit to financing climate change initiatives and fulfilling their financial promises.

“For many countries, financing is a condition, a key point, for an agreement in Paris. So it’s crucial that the countries of G7 respect financing needs, and if necessary, give money,” he said.

Underlining the financial crunch that prompt developing and poor nations to restrict their renewable energy plans, Fabius said that for many countries financing will be a key point for agreement in Paris. He therefore, urged the countries of G7 to help out those countries through financial aid, if required.

He highlighted Africa’s renewable energy sector as a potential market for rich nations that will help to reduce the continent’s bloated carbon emissions. Fabius suggested installing an alert system for the countries that are on the brink of climatic crisis. The countries that will be interested will meet at the end of June.

Fabius said that the world is expecting a new treaty that will help curb the global warming universally, by 2020. However, he stated that 2020 is far away and there is need to do a lot of things for these two initiatives which will help reinforce the negotiations of the entire climate conference.