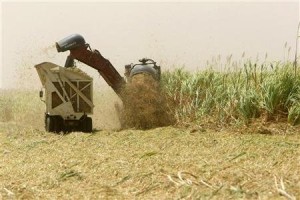 Addis Ababa aims to become Africa’s biggest sugar producer and exporter with plans to double the number of its sugar estates to six by November this year and to set up a string of large estates throughout the country by 2020.

It has identified over 500,000 hectares of land as suitable for large-scale sugar plantations, Ethiopia’s Industry Minister Ahmed Abtew said on Monday.

According to local newspapers, Ethiopia’s current sugar-producing capacity at three existing plantations is less than 300,000 tons each year, covering up to 70 percent of local demand, meaning it must import bulks amounting to 2,000 TCD (tons of cane each day).

“Around September, October and November, we will inaugurate the sugar processing industries of Tendaho, Kesem and Kuraz. The three projects are taking shape in the country’s Afar, Oromiya and SNNP regions and will have a capacity to produce more than 25,000 TCD,” Industry Minister Ahmed Abtew said.

“The sugar industry is vital. We are planning to earn around half a billion dollars from these three projects,” he said.

The government is also planning to produce up to 44,000 metric cube of ethanol that would be used as blends with gasoline.

“Sugar production is a key part of our growth and industrialization plans. We will continue to expand the sector,” Ahmed said.

As part of the reform of the sugar sector plan, 11 plantations comprising processing units will be established in the country, bringing the total sugar production to two million tons. The country has recently expressed its desire to become the main producer and exporter of commodities on the continent.

For Ethiopia this strategy is part of a logical transition from production to processing, needed to maintain its current growth which posted a rate of 10% over the last decade.