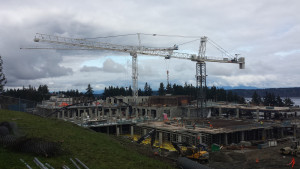 Gabon plans to raise at least $500 million via a new 10-year Eurobond at a 6.95% interest rate to fund infrastructure projects that will help wean the nation from its dependence on oil, Economy and Investment, Minister Regis Immongault said.

The program preceded by a road show in Europe and the US was arranged by Deutsche Bank, JP Morgan and Standard Chartered.

The funds to be raised through the Eurobond will be used to finance infrastructure projects in the Central African country whose economy is heavily dependent on crude oil exports.

“The Eurobond is for infrastructure, energy, water, education and health facilities,” Immongault said.

“It’s a strong signal of support for our reforms and economic policies. Investors recognize our proactive approach of dealing with the recent oil price volatility”, he announced.

In Gabon, oil accounts for 52% of state revenue and almost 80% of export earnings. Gabon is rated “Ba3” by Moody’s and “B +” by Standard & Poor’s and Fitch Ratings.

The country has struggled to cope with a 40 percent drop in crude prices over the past year. Its current budget is based on an oil price of about $45 a barrel, Immongault said. That’s about $20 below the current price.

“Our strategy is to preserve the sustainability of public debt,” Immongault said. Another Eurobond next year “is not planned, but it’s possible,” he emphasized.

To increase its revenues, Gabon is also trying to attract more tourists and develop deposits of manganese, which is used to make steel.