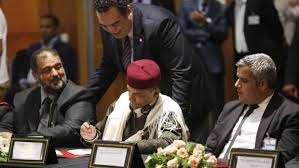 Leaders of Libyan political parties that met in morocco have reached a new version of a U.N.-brokered peace deal even though the government in Tripoli stopped participating in the latest discussions.

U.N envoy to Libya Bernadino Leon said after the deal was initialed on Saturday that the Tripoli government could still return to the discussions and Morocco’s Foreign Ministry stated that the main sticking points were over which parties would run which institutions.

However, tensions could soon rise after General Haftar of the internationally recognized government stated that the armed forces should be above the political process because they drew their legitimacy from the elected parliament.

The deal reached during the weekend is expected to put pressure on Tripoli to return to the discussions in order to work towards a unity government to facilitate the transition towards a democratically elected government. Fighting in Libya has been going on for more than four years.

A new round of talks to be held after the Ramadan holiday is expected to be oriented towards forming an interim government and finalizing a power-sharing agreement regardless of Tripoli’s stance.

Meanwhile in Tobruk, General Haftar gathered senior military officials around him at a press conference before giving an ambiguous analysis in the wake of the just concluded peace accord. He dwelled on national security and urged politicians to refrain from interfering into military affairs and going to combat zones and making statements on camera. Haftar is the commander-in-chief of the Armed forces.

Leon has been working towards the end of the Libyan war but the apparition of ISIS linked groups in the country could be a stumbling block as negotiations progress slowly between the two rival governments.