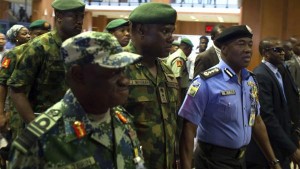 Nigeria’s President Muhammadu Buhari has fired Nigeria’s Chief of Defence, and the heads of Army, Navy and the Air Force.  The service chiefs were relieved Monday.

The sacking of the military chiefs had been expected, because they had been appointed by former president Goodluck Jonathan, and also because they failed badly in dealing with the insurgency. They were perceived to be part of the old administration which Buhari had previously blamed for being complacent and negligent.

Nigeria’s armed forces have lately been dogged by mutinies, allegations of corruption and human rights abuses, along with lingering questions about its inability to defeat the insurgency.

Amnesty International puts the death toll at more than 20,000 to include the deaths of some 8,000 detainees who allegedly died in military custody.

Mr. Buhari has promised to investigate Amnesty’s allegations. Hundreds of soldiers are being court-martialled for alleged cowardice and desertion.

Military experts said the shake-up shows how Buhari plans to focus on Borno, the vast northeastern state where Boko Haram got its start and where it has been launching attacks regularly.

The sackings come two weeks before Mr. Buhari is to meet U.S. President Barack Obama at the White House in Washington D.C. to discuss more American help in the battle to curb the Islamic uprising that has driven 1.5 million people from their homes and killed more than 13,000 people in six years.