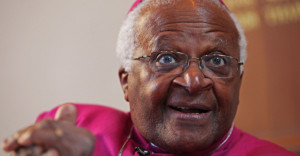 In  a statement released on Tuesday by the Desmond & Leah Tutu Legacy Foundation, his daughter, the Reverend Canon Mpho Tutu,  said  the  Archbishop’s family expects he’ll be released from the hospital in Cape Town in a “day or two.”.

Tutu, 83, won the 1984 Nobel Peace Prize for his fight against racism under apartheid rule in South Africa, which ended a decade later. While he has withdrawn from active public life in recent years, Tutu remains an outspoken champion on human rights and an advocate for anti-poverty and AIDS programs.

The archbishop, who is among the world’s foremost human rights activists including Nelson Mandela, Martin Luther King Jr., and Mohandas Gandhi, was awarded the Nobel Peace Prize in 1984

Desmond Tutu has been treated for prostate cancer for many years. He announced his retirement from public life in 2011 but has still travelled widely and made public appearances.

The legendary anti-apartheid leader had to cancel plans to travel to Rome in December while fighting prostate cancer, a disease he’s lived with for 15 years.  In 2013 he was hospitalized for another infection that followed a minor surgery.