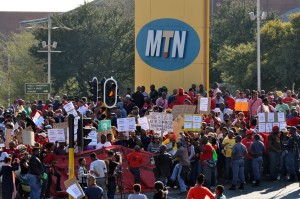 One week after the appointment of Mteto Nyati as chief executive of the South African mobile operator MTN Group, the leaders of the Communications Workers Union (CWU) reached a deal over bonuses on Thursday, ending two months strike by the workers.

Zodwa Kubeka, spokeswoman for the Communication Workers Union said  its members at MTN want a 10 percent pay rise and higher allowances for work done over weekends and holidays but  finally they  had agreed to the 8 percent bonus payment this year and 12 percent next year. Both payments are guaranteed and not related to the performance of the company.

The company, which reported a 9 percent increase in full-year profit in March, employs about 6,500 people in its home market, where it trails rival Vodacom by subscriber numbers. MTN’s biggest market by subscribers is Nigeria.