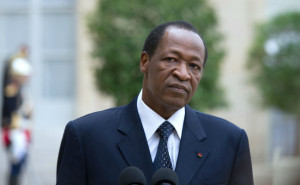 Burkina Faso’s transitional council has indicted on Thursday, the former President Blaise Compaore and some senior members of his government for high treason. The National Transitional Council, which is acting as parliament, said its members had adopted a resolution asking the High Court to put deposed leader Blaise Compaore on trial for “high treason” and violation of the constitution.

In a statement, the governing council also said “Former Prime Minister Luc Adolphe Tiao, who signed an order authorizing the army to crush the October 30 and 31 uprising, was charged with assault and battery, murder and complicity in murder of demonstrators.”

Some of the ministers include former foreign affairs minister Djibril Bassole and former security minister Jerome Bougouma who were also charged with embezzlement and illegal enrichment.

Compaore, who came to power in a coup in 1987 and ruled the West African nation with a firm hand for nearly three decades, was forced to flee last October after his attempt to change the constitution to be able to seek a third term in office was rejected in a popular uprising. He has since sought exile in neighboring Côte d’Ivoire.

The top court of the 15-nation Economic Community of West African states (ECOWAS) said on Monday that Burkina Faso’s move to exclude Compaore from running in the elections was illegal. The court annulled a new electoral law that sought to bar several political parties and individuals linked to Compaore from contesting the coming polls.