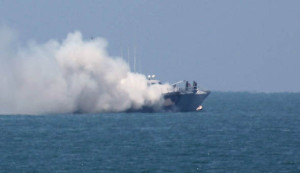 Islamic State-affiliated militants in Sinai say on Thursday that they have carried out a missile attack on an Egyptian naval vessel in the Mediterranean Sea near the coast of Israel and the Gaza Strip.

The militants, who call themselves Sinai Province, posted pictures and  video online of what looked like a missile followed by a large explosion on the ship.

While the group’s previous videos have been dominated by footage of spectacular attacks, the new film is mostly dedicated to guerrilla strikes against military outposts in the desert.

The militant group Sinai Province has focused mainly on attacking Egyptian soldiers and police in the Sinai Peninsula, killing hundreds of security personnel since Islamist President Mohamed Morsi was overthrown in a July 2013 military coup after mass protests against his rule.