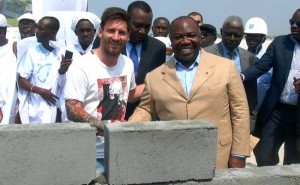 The Barcelona star was guest of President Ali Bongo Ondimba last weekend to lay the foundation stone for a new 20,000-seat stadium in Port-Gentil. The facility will host matches of the 2017 Africa Cup of Nations.

Messi met several excited fans and signed autographs before he was driven in a presidential convoy to the scene of the foundation stone laying ceremony.

Port-Gentil, Gabon’s second biggest city will be home to matches during the 2017 AFCON. The tournament will be played from January 21 to February 12, 2017.

According to France Football, the four-time Ballon D’Or was paid 3.5 million Euros by Ali Bongo in exchange for his brief presence on Gabonese soil.

France Football claims that the trip was arranged by Messi’s former teammate Samuel Eto’o, who enjoys a close relationship with Bongo.