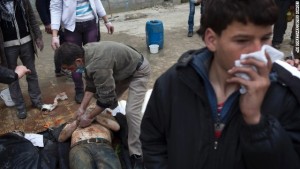 An agreement on a draft resolution between U.S. Secretary of State John Kerry and Russian Foreign Minister Sergei Lavrov could pave the way for the identification of those behind the Syrian chemical weapons attack.

The agreement, finalized in Malaysia where the two men are on a working visit, could lead to the draft being scheduled for a vote at the Security Council on Friday if there are no objections to it on Thursday by any of the 15 council members.

U.N secretary General Ban Ki-moon and the International Atomic Energy Agency are expected to form a team of investigators when the draft is voted by the Security Council.

Meanwhile, Iranian Deputy Foreign Minister Hossein Amir-Abdollahian said his country will be submitting to the U.N chief “one of the most effective and serious plans on the agenda of the United Nations and international players” to end the Syrian war. The plan was drafted after“detailed consultations” between the Assad regime and Tehran and it is a revised version of Iran’s last year initiative.

Amir-Abdollahian is confident that the plan will be supported because “many of the foreign players” that choose arms as an option to end Assad’s regime in 2011 are now “resorting to and focusing on a political solution as the most appropriate way to solve the Syrian crisis.”

Iran and Russia support the regime in Damascus and President Rouhani assured visiting Syrian Foreign Minister Walid Muallem of their full support to end the war. Moscow uses its veto power against drafts detrimental to the Assad regime.